i just got this email from my sister. after reading it, i just wanna like to hire a body guard to take care of me 24/7. serious! at the same time i feel responsible and must to share this info to all of you. PLEASE READ CAREFULLY AND SPREAD TO OTHERS !! PLEASE PLEASE!! spread it if you want your family, friends and everyone around you are safe. maybe it can't be avoided. but at least, always beware nowhere you are. 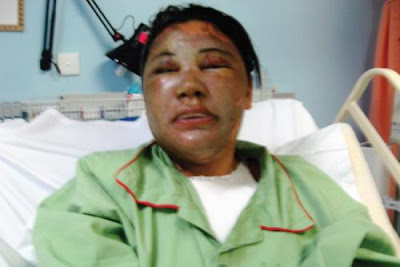 CRUEL ACT: Zuhainah in pain and misery on her hospital bed
KUALA LUMPUR: A housewife in Mantin, Negri Sembilan, and her niece are the latest victims of a "burning liquid" attack last Saturday night when they were riding a motorbike home after dinner.
Zuhainah Tengkis, 27, suffered a swollen eye, burns on her face, chest and hands. She is now under intensive care at Hospital Kuala Lumpur.
Zuhainah and her teenage niece Shakilla Sulaiman were on the way home from Jalan Mantin to Batu Lima at 9pm when two men on a bike suddenly appeared alongside them.

Zuhainah before the attack
CRONOLOGY:

"One of the men said 'Hi' to us and when we turned in his direction, we felt liquid being splashed on us, causing a burning sensation. The men then fled,"

"I was lucky as the liquid splashed my helmet but my aunt suffered burns to her face."

Despite the injuries, Zuhainah rode straight home with Shakilla behind her. Their screams for help was heard by her husband, rubber tapper Azman Jani, 30.

"I heard my wife and niece scream. I rushed out only to see my wife's face swollen and red with burns,"

"My relatives helped me use a garden hose to spray Zuhainah with watter. This brought her some relief before we rushed her to Hospital Seremban. At 1am yesterday she was transferred to Hospital Kuala Lumpur."

Mantin is 64km from Kuala Lumpur which saw four "splash and run" attacks in Bangsar, Brickfields and Jalan Conlay resulting in injuries to 14 victims over the past month.
The Malay Mail visited Zuhainah at HKL yesterday. She was still in a daze.

"I don't have enemies and I don't know why my niece and I were targeted,"

said Zuhainah who had a fleeting glance of her attackers.

"The men were fat and darkskinned. They wore green uniforms with badges resembling Rela uniforms. They had black boots and their bike was a red-coloured Yamaha Lagenda."

It is understood Zuhainah has to undergo treatment at HKL for at least three weeks.
Zuhainah's elder sister, Salbiah Tengkis, 30, said:


"We are distraught at what happened. We hope police will catch the suspects."

"Initial investigations showed the number plate on the attacker's motorcycle was fake,"

"Jalan Mantin is a lonely area. We are waiting for lab results on what chemical was used on Zuhainah and Shakilla."

Victim's transfer request will be known in a week
KUALA LUMPUR: A teacher who requested for a school transfer after being splashed with corrosive liquid while passing SRJK Tamil Vivekananda near Jalan Sultan Abdul Samad in Brickfields here on March 25, will know the decision in a week.
The 25-year-old history teacher of SMK Vivekananda, who preferred to be known only as Ng, said she submitted the transfer request on Friday to the Education Ministry.

"I was told a decision on my request will be known in a week's time. I pray they grant my request as I do not feel safe working in KL anymore,"

she told The Malay Mail.

"I want to continue teaching because that's my calling."

Ng, who started at SMK Vivekananda in January after graduating from University Perguruan Sultan Idris (UPSI) in Perak last October, suffered discomfort in her eyes and burns on her chest from the liquid-splashing attack by a motorcylist at 7am on March 25.

"Blood kept oozing from the burn injuries near my nipples for several days until my latest treatment at a private clinic,"

"My injuries had dried up but I have to constantly clean the wounds."

Initially, Ng had problems sleeping and would wake up crying.

"I am now on sleeping pills to help me rest at nights. Now the sound of a motorcycle engine makes me fidget,"

she said.
The motorcyclist approached Ng from behind as she was passing the primary school to get to the secondary school in the same compound.
The liquid splashed on her eyes, baju kurung and bag. She was rushed to the school canteen by a couple who had just sent their children to the school.
At the canteen, Ng's wounds were run over with water before an ambulance took her to University Malaya Medical Centre (UMMC).
Due to the burns, she has problems wearing normal clothes as it hurts whenever the fabric touches her wounds.
Ng described her assailant as a man of dark complexion.
She was the 12th of 14 victims of "splash and run" motorcyclists in KL over the past month.
First, on the afternoon of March 2, eight primary pupils and a teacher of SK Bukit Bandaraya in Bangsar were splashed with a "burning liquid" by a motorcyclist.
Next, on the evening of March 24, two marketing executives suffered burns from being splashed by a motorcyclist near Jalan Tun Sambanthan in Brickfields.
After the attack on Ng on March 25, a French man and his female companion were also splashed with burning liquid at Jalan Conlay on the afternoon of March 26.
Police urged eyewitnesses and the public who have information on the incidents and the attackers to come forward, but all cases remain a mystery.
p/s: tolong la weyhhhh.
spread this as many as you can.
aku tak nak ape-ape terjadi kat korang.
corat coret si cimöt 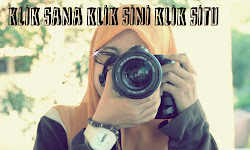 me on the dark side